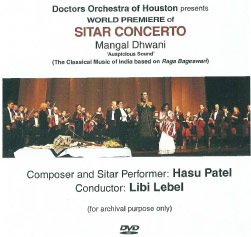 The Western concerto, a type of composition featuring a soloist with accompanying musicians, lends itself well to the sitar, since this is the normal format for sitar music in its traditional setting. To perform Raga Yaman Kalyan, for example, the sitar player would have with her on stage two accompanists, one playing the tambura, the other the tabla. The tambura is a lute, held vertically, its four strings repeatedly plucked to provide a steady background tone. The tabla is a pair of short drums, facing up in front of the player. This instrument is also mostly in the background, but plays intricate rhythms and drummed commentaries to the melody line. At times it rises to equal prominence with the sitar in a dialogue between the two instruments.

In Hasu Patel’s concerto, the traditional ensemble is retained, augmented by a delicately orchestrated chamber orchestra. The string section quite naturally complements the role of the tambura, but with the capability of playing melodies as well. A single flute and clarinet add echoes and doublings of the sitar melodies, while in the percussion section, a xylophone, glockenspiel, and timpani cleverly augment the sounds of the tabla. The deep tones of the timpani very much resemble the typical sound of the left hand tabla part, while the xylophone has just the right timbre to mimic the dry patter of the tabla player’s right hand.

The formal structure of the composition is not the typical sonata form of the classical concerto, with an orchestral introduction, soloist exposition, a development of the themes by both, and a recapitulation of these themes at the end. Rather, it is drawn entirely from the classical presentation of a Hindustani raga. The sitar begins alone, supported only by the droning strum of the tambura. In India, this is known as the alap section, in which the soloist presents the typical melodies of the raga being performed, in a leisurely, unmetered way. In a traditional raga performance, the alap might last for ten or twenty minutes, ending with the entrance of the tabla and the introduction of a metered structure. But in adapting the raga to the western concerto style, Patel calls for the tabla to enter after only about three minutes. For two more minutes, the traditional trio continues alone, at which time the orchestra asserts its presence ever so gently with entries by the flute and clarinet. The string section, signaled by some bell tones, then also enters. The players echo the sitar melodies, forming a contrapuntal interplay that is altogether pleasing.

After a few more minutes, the orchestra takes over and the sitar falls into the background. The piece now takes on its concerto nature. The strings dominate, with violin, flute & clarinet solos. It is reminiscent of the concerto grosso, with several soloists trading themes back and forth. The sitar creeps in again after a short while, but now blended in as if it were just another member of the orchestra.

The interplay of instruments continues, with many beautifully crafted duos, including one with the clarinet and xylophone. Eventually the sitar returns to prominence, and the tabla, having been silent for a time, also re-enters. As the general intensity builds, themes with reiterated notes begin to appear, imitating an agitated style of sitar playing in which three rapid notes fill in between each melody note.

The orchestra and sitar drive to a climax with punctuation by the timpani, followed by more active lines on all of the instruments, with rapid runs up and down. The lower strings have their say, echoing the melody line, and a second climax builds, using formulaic cadential patterns that signal the end of a major section in a traditional piece. Now the sitar and tabla play alone again, leading to a final tutti section with all instruments driving to a climax. The piece ends with the typical denouement: after the final note by the entire group, the sitar plays a slowing, descending line, ending on a quiet note.

The achievement of this compact, 27-minute concerto is to introduce the style of traditional Hindustani music to a Western audience that might not otherwise hear it. By featuring the sitar in the Western classical form of the concerto, by pairing it with the flute and clarinet, the violin and xylophone, Hasu Patel has brought it from a niche at the fringe of the American musical scene into the spotlight. Ms. Patel has been teaching and performing traditional Hindustani music for decades from her home in Cleveland, Ohio. By writing and performing this concerto, she has succeeded in moving her beloved traditions closer to the Western audience. This performance was the premiere. We will hopefully hear other orchestras take up the challenge to perform this sitar concerto, and spread the message that Indian music and Western music can and do mix, especially when guided by the artistic hand of Hasu Patel.